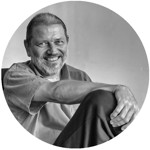 Some physicists actually believe that the universe we live in might be a hologram. The idea isn’t that the universe is some sort of fake simulation out of The Matrix, but rather that even though we appear to live in a three-dimensional universe, it might only have two dimensions. It’s called the holographic principle. (vox)

physicists recognized that looking at the entire universe as a two-dimensional object that only looks three-dimensional might help solve some deeper problems in theoretical physics.

The implicate (also referred to as the “enfolded”) order is seen as a deeper and more fundamental order of reality. In contrast, the explicate or “unfolded” order includes the abstractions that humans normally perceive.

In the enfolded [or implicate] order, space and time are no longer the dominant factors determining the relationships of dependence or independence of different elements. Rather, an entirely different sort of basic connection of elements is possible, from which our ordinary notions of space and time, along with those of separately existent material particles, are abstracted as forms derived from the deeper order. These ordinary notions in fact appear in what is called the “explicate” or “unfolded” order, which is a special and distinguished form contained within the general totality of all the implicate orders